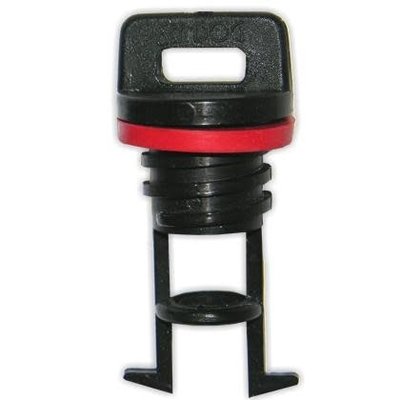 One single coarsely threaded replacement screw plug, by SeaLect Designs. Replace a lost drain plug on your kayak. The Sea Dog drain plug is a common size and thread shape. This plug set can easily be used to replace a lost drain plug on most kayaks. Often fits into a base plate mounted on the kayak. The Drain Plug Base is not included with this plug. The Sea Dog, aka Sea-Lect, standard plug fits some Wilderness Systems, Cobra, Hobie, Heritage and Perception kayaks. Reported to fit the Emotion Guster, made circa 2016. It can also fit into a simple drilled hole approximately 5/8 in. to 11/16 in., depending on deck material. The plug is equipped with a retention clip to keep it from getting lost and can be removed if necessary. (A string tied to handle or strap eye can also be used.) The plug seals with a red O-Ring to prevent leaks (some Sea Dog plugs may have had a black O-Ring).