Take note: the Rideau Canal is definitely worth paddling. It is relatively easy, with easy access to supplies along the way. There is camping at every lock for only $4.90. The camping rate was correct as of 2012, but recent budget cuts to Parks Canada funding may change things fast. Go out and paddle the Rideau Canal while you still can enjoy it.

Take note: the Rideau Canal is definitely worth paddling. It is relatively easy, with easy access to supplies along the way. There is camping at every lock for only $4.90. The camping rate was correct as of 2012, but recent budget cuts to Parks Canada funding may change things fast. Go out and paddle the Rideau Canal while you still can enjoy it.

The canal has a rich history and all your research freaks can check your facts. Now that the Rideau Canal is a UNESCO World Heritage Site, there is even more information than ever before. There are plenty of guides and resources to plan your trip. "Watson's Paddling Guide to the Rideau Canal" is thorough. I'm here to offer an opinion and some observations.

I put in at Long Island Marina in Kars, just south of Manotick, paddled up the Tay Canal to Perth, back down the canal and south to Lower Brewers Locks. Overall, the canal is diverse and quite appealing to the paddler. You are not confined to the narrow and often serpentine channel, as is the case with boats. There are marshes, bays, shallow shores and more just waiting for you to explore them. Enjoy the ride, take a detour.

Long Islandwas a good starting point as there is a nice treed area adjacent to the ramp to set up. I have a Feathercraft, a skin on frame kayak that requires assembly, so I pay particular attention to a flat, shady area for setup/breakdown. Additionally, the river becomes chock-a-block with competing displays of excess between Kars and Long Island Locks.

Most route guides suggest starting in Kingston and paddling to Ottawa, but I have never been known for following the crowd. This is primarily due to prevailing winds which I knew would be against me most of the paddle. Anyway, I am in no hurry and always appreciate a breeze in the face a hot day. 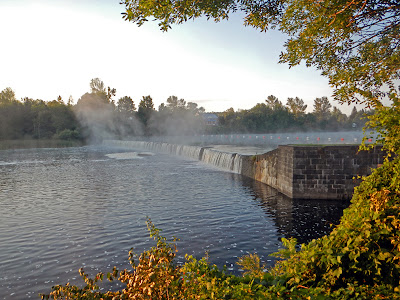 From Kars to Beckett's Landing, the river is largely lined with homes. There are, however, a few places to pull out, including Rideau River Provincial Park (camping) and Baxter Conservation Area. Onward toward Burritt's Rapids, the development dwindles and farms become more prevalent. Although each of Burritt's Rapids, Lower and Upper Nicholsons and Clowes locks has nice camping spots, I camped at upper Clowes.
The lockmasters do not arrive until 8:30 am. and not having to wait for the lock allows for an early departure. I was at Merrickville for the first opening. (The opposite would apply if you came the other direction and the bottom of Burritt's would be the desired spot as the distance to Long Island Lock is the longest single segment on the system.)

I learned that the locks are required to be emptied each night. If you are going uphill and are there at 8:30, you automatically get the first lock, no waiting for the chamber to be filled/emptied. The lockmasters also talk up and down the canal, so they knew I was coming. They will also let the next lock know if you are intending on paddling through and they are often waiting for you. 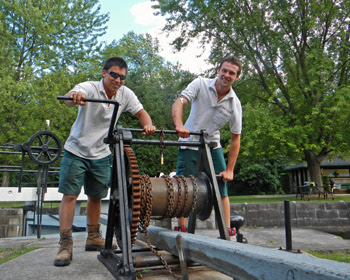 Merrickville is a set of three locks with a larger central chamber for boats to pass. Smith's Falls is the highest lift on the Rideau and one of the few mechanical locks on the system. The majority of locks are opened and closed manually, just as they were installed in the 1830's

There is a lot of bird life along the canal and the section from Merrickville to Kilmarnock and on to Edmund's Lock is just such a place. Loons and ospreys are prevalent as are several species of marsh birds. Great blue herons patiently fish along the shore. In late August, the red-winged blackbirds are congregating in preparation for migration. In kayaks or canoes, we can go outside the channel that limits the boaters and get close to the marsh life.

Edmunds lock through Smith's Falls was interesting in the sense that I can now count on one finger the number of times I have paddled through downtown Smith's Falls. There is a park to pull out at and take a break. Above Smith's Falls the channel is narrow and winds through marshes to Poonamalie Lock. There is plenty of space to camp at Poonamalie and the lockmasters will happily leave the key to the washrooms. A walk up around the end of the cut channel leads to good swimming near the falls. Clowes to Poonamalie is an easy day and many argue Poonamalie is one of the nicest places to camp.

Leaving Poonamalie, the route winds into Lower Rideau Lake. There is plenty of exploring outside the channel for the paddler. The entrance to the Tay Canal is at Beveridge's Locks; two chambers that lift you to what can only be described as a birder's paradise. That day, I had two distinct up-close-and-personal experiences with loons. Paddling into the heart of Perth and grabbing a coffee, a cocktail or a meal is fun. Camp the night as Last Duel Park. It has been called one of the nicest municipal campgrounds in Ontario. Or stay with your friends who live along the river! 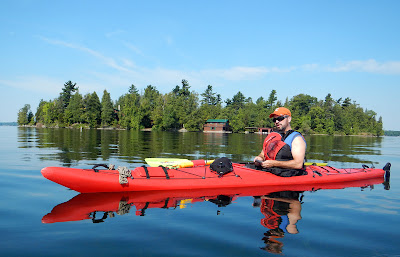 My friend Cam joined me in Perth and we headed back to the Rideau Lakes. The paddling can be slow if there is a strong headwind. But no worries, there is plenty of time. This often leads to creative routing to capitalize on a lee shore or some islands and perhaps catch a glimpse of something interesting. Colonel By Island, on Big Rideau Lake, is a Parks Canada camping location and Murphy's Point Provincial Park is nearby.

There was a slight delay for repairs at Narrows Lock into Upper Rideau Lake. Most boaters head to Westport, but paddlers will continue along the east side of the lake to Newboro Lock. Popular with the boating crowd, it is very quiet. It is all downhill to Kingston from here and Newboro Lake offers plenty of detour possibilities depending on how far you choose to paddle. The lake is surprisingly un-congested and the shoreline varies as you go. It becomes Indian Lake without you even really noticing and all of a sudden, Chaffey's Locks. This is a good place to camp as it has nice camping, all the amenities, including convenience store, beer store and LCBO. 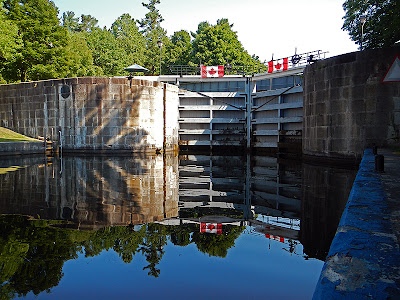 The next morning, Opinicon Lake was calm and we paddled somewhat circuitously. As had been the norm most days, the breeze picked up late morning making for very pleasant paddling conditions. There are several bays to explore and a few side trips on Opinicon, or you can head directly to Davis Lock. It is a short run across Sand Lake to Jones Falls. 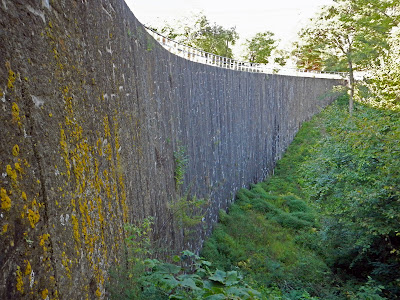 Jones Falls is definitely one of the highlights of the canal. When the dam was completed here in 1831, it was the tallest dam in North America and the third tallest in the world! There is good swimming in the middle pool and camping all over the place. It is a three chamber lock and being on the wrong end of the wait requires patience. When we arrived, the Little California Community Club was hosting a roast beef bbq with corn, salads, all the fixings and desert for $5! There were two local bands playing and we pulled in to the middle lock to the mellow tunes of "On the Banks of the Old Rideau".

The Kenney Hotel, at the bottom of the locks, has a licensed restaurant and a diner that serves huge ice cream scoops. 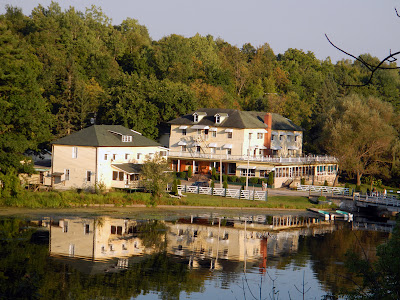 Whitefish, Little Cranberry and Cranberry Lakes are dotted with cottages but there is no feeling of cluster. I was surprised, actually, how much shoreline along the system is unadulterated. There is an excellent side trip into Dog Lake as well.

Our last day we paddled down to Lower Brewer's Lock before turning around and returning Upper Brewer's. It has better camping as Lower Brewer's has a small road (noise and lights) and further down Kingston Mills is close to the 401 and the train tracks. The lockmasters warn that if you want to sleep, avoid camping at Kingston Mills. It was a short day, but allowed me time to clean and disassemble my boat and be ready pick up the next day.

All in all, the Rideau Canal is an excellent option for those who are newer to paddle excursions. You are never far from land or services and the convenience of the cheap and accessible camping makes this trip a good learning option. With plenty of places to put in and take out, you can do the whole canal or segments easily.